Hey everyone, my name is Michael Tsarouhas. I am the lead game designer on Insurgency: Sandstorm. As a part of our effort to steer post-release Sandstorm onto a community-oriented path, we’re going to be releasing community updates like this one which provide an inside look at development and feature upcoming content. Before we begin, please remember to fill out our new survey here[www.surveymonkey.com] and let us know just what content and changes you’d like to see for Insurgency: Sandstorm’s ongoing post-release development.

As mentioned in our recent survey post, one of the things we learned from the results was that players are hungry for new maps. So today, we’d like to take some time to talk about our upcoming new map Outskirts, formerly known by its internal name “Compound”. Below you can see my interview with Zach Snyder, one of our level designers, here at New World Interactive. A professor in architecture, Zach was originally a custom map maker in our community as far back as the original Insurgency: Modern Infantry Combat mod for Half-Life 2. Later on Zach created Tell[insurgency.fandom.com], a map entry which won 3rd place in our 2014 Gamebanana Mapping Contest[gamebanana.com] for the original Insurgency standalone. 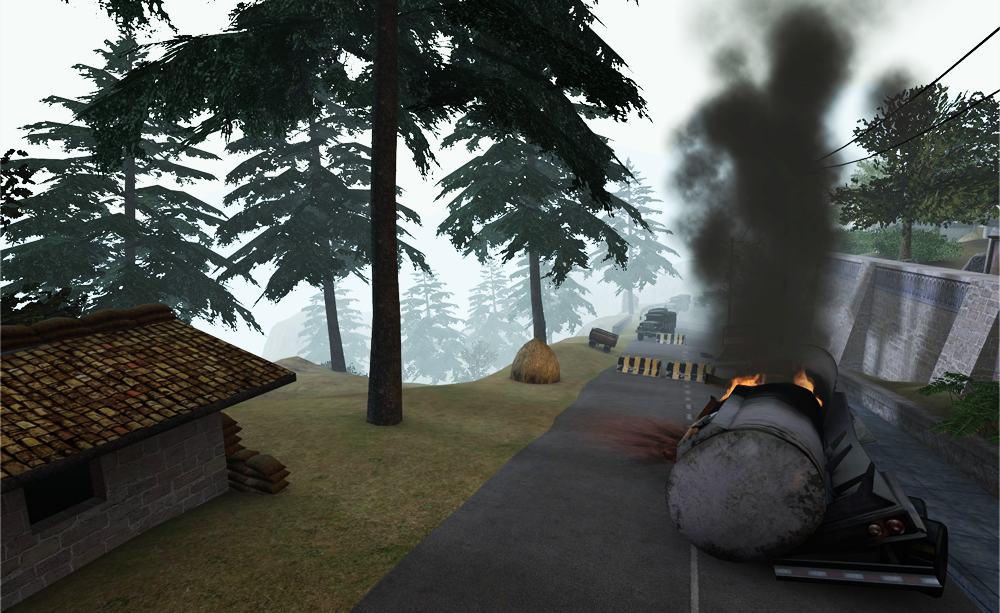 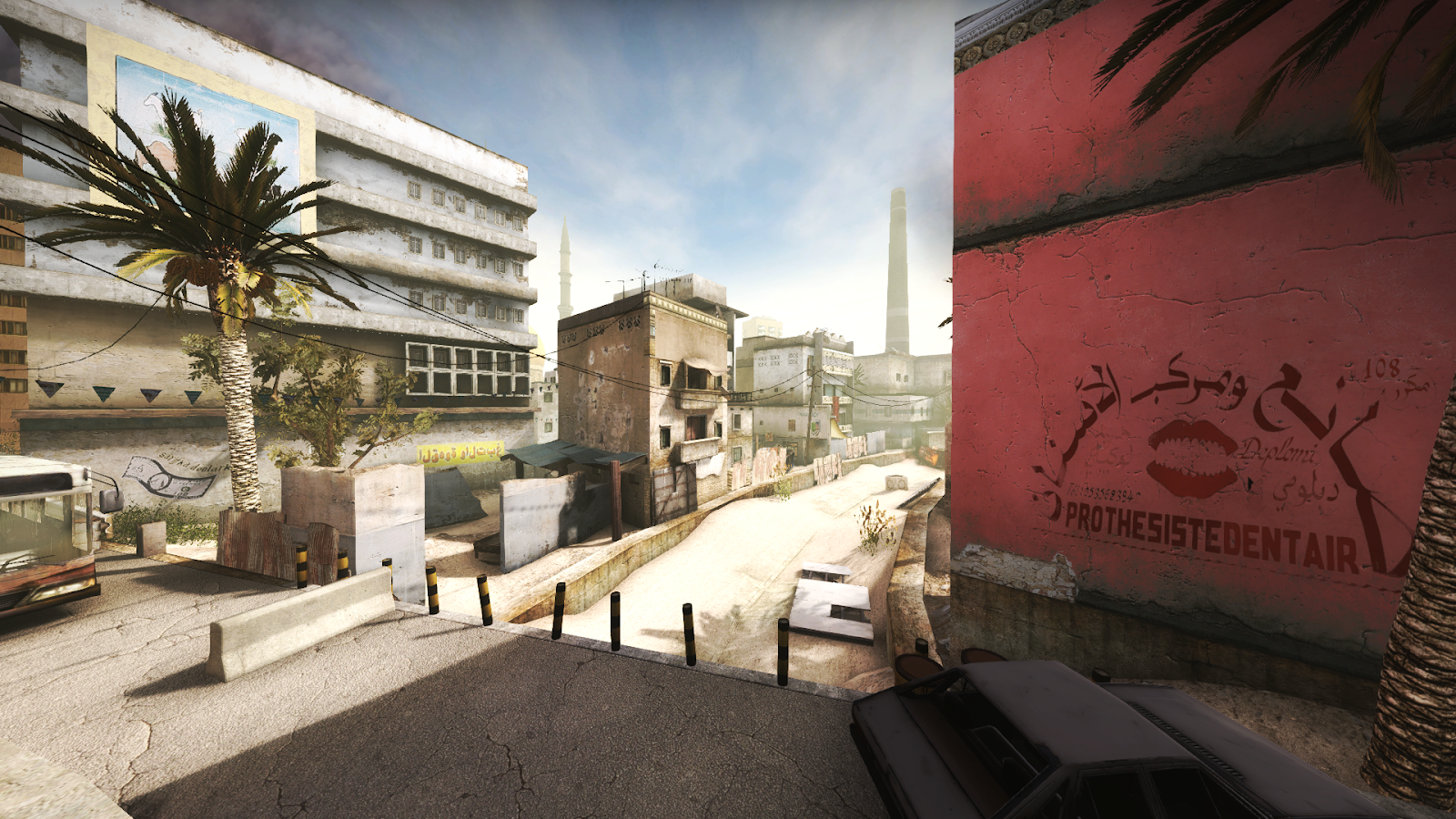 (Tell features a dense layout with a steep urban incline and tall tight alleyways. It is still today the most played Insurgency 2014 map in both versus and cooperative play.)

Our team was so pleased with Tell, we decided to hire Zach and put it in-game officially. He’s with us still today, and working now on our next map Outskirts for Insurgency: Sandstorm.

Summarize Outskirts for us in five words.

Where did the idea for Outskirts come from?

During the early concept phase of the map, we were poring over reference images and became interested in several that depicted collapsed and semi-collapsed buildings. I was excited by the implications of taking a conventional space, tipping it over a bit, and getting a new set of opportunities from the strange new space that’s been created. This idea became the collapsed building that is now the centerpiece of the map. 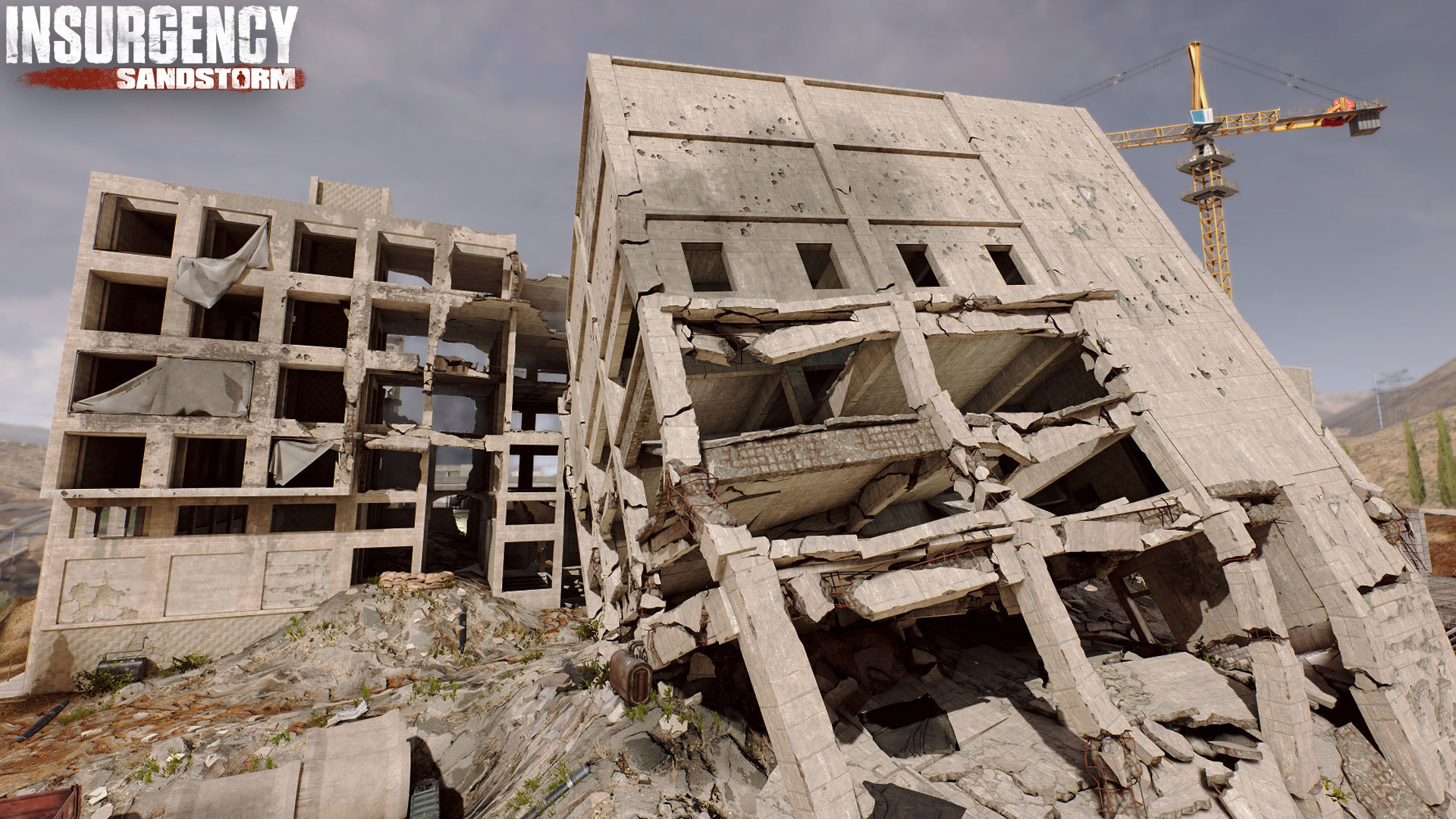 The construction theme was initially a utilitarian choice, as it afforded a lot of flexibility in how the geometry of the buildings might be optimized for gameplay, but it also seemed like a compelling narrative direction, given the ideas of destruction that seeded the conception of the map.

In terms of gameplay, what sets Outskirts apart from other maps in Sandstorm?

Push players will find more breathing room on this map than in some of our other maps, while Firefight players will find themselves playing in tighter objective layouts that were conceived, from the ground up, as Firefight specific. Coop players will be able to sample both styles of gameplay in what I think is, end to end, a longer than average playthrough with a very diverse set of objective environments.

In terms of visuals, what sets Outskirts apart from other maps in Sandstorm?

There are three distinct areas of the map, each differing thematically. The first theme is the construction site, which has both wide open gameplay in a series of trenches between buildings, and close quarters fighting inside the buildings. The second is a residential compound on a hill overlooking the construction site. Up there you have mid range and close range engagements in a series of well defined lanes. The third takes place around a stream in a valley, where a shantytown surrounds an electrical substation. The layout here is also lane-based, but with some longer lines of sight.

The observant player will notice some of the same building blocks in this map that exist in our other maps, but there’s been a concerted effort to use those pieces in novel ways and squeeze a little bit more life out of them. In addition, we’ve produced a bunch of new assets to support these new themes. 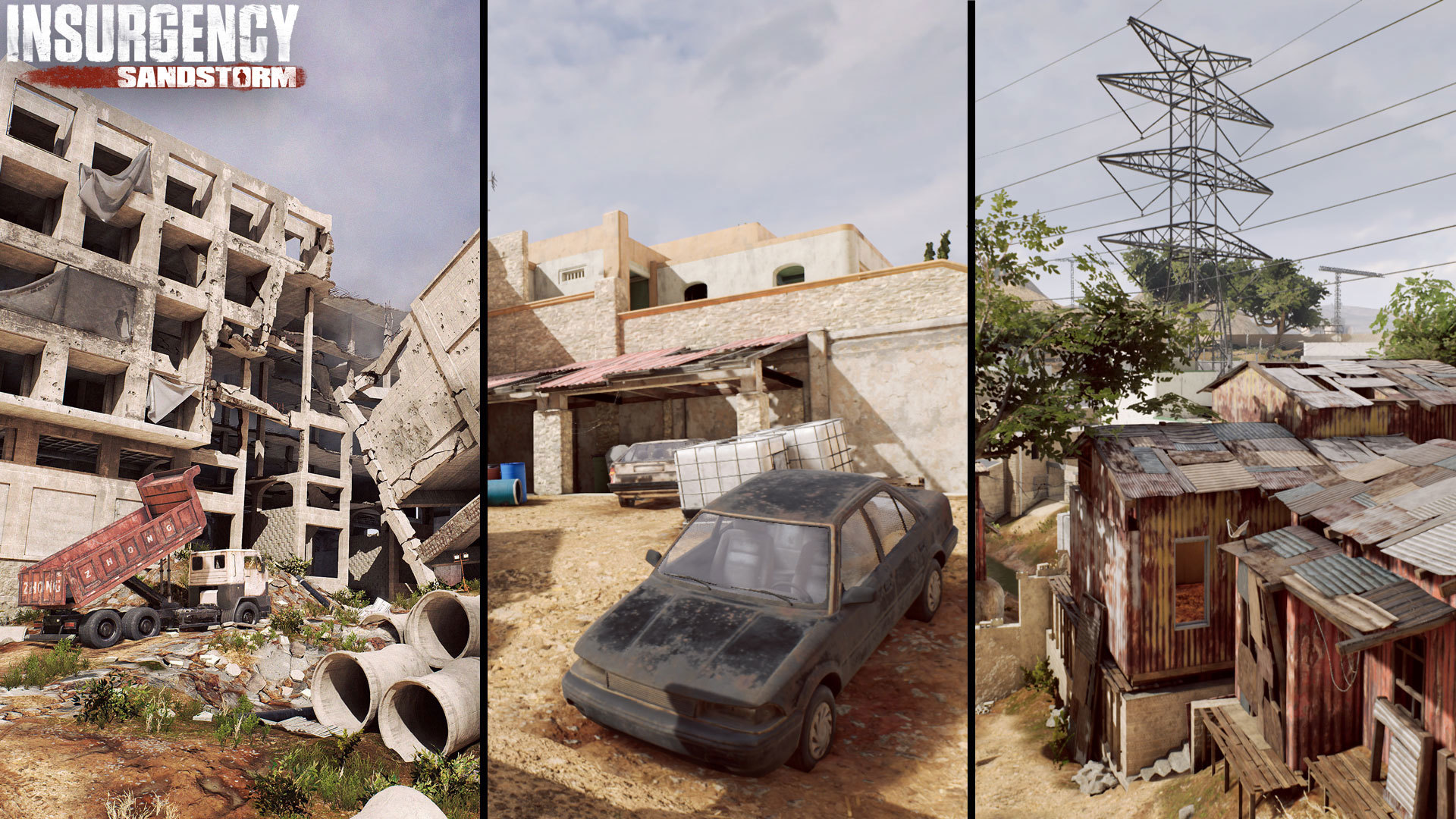 In what ways did you collaborate with our other level designers on Outskirts?

Unreal Engine’s level editor allows you to simultaneously work with a multitude of level files under the umbrella of a master level file. What this means is that while I work on blocking out one corner of the map, another level editor can be in another corner polishing the initial building layout I did the week before. At the same time, other designers and artists can be under the hood designing coop routes, optimizing our geometry, or making and placing level-specific art assets.

In terms of the actual teamwork on this map; while I’ve done pretty much all level design and a good deal of the polish on the map, we traditionally work in a way that makes good use of a particular level designer’s interests and skills. For instance, Steve Cron, who was making custom coop maps as “Chief-C” for Insurgency 2014 and has been on the team for a while now, did all of the coop layout and bot placement on the map. Jan Huygelen, who works magic inventing new ways to use the building blocks we use to make our levels, crafted all of the interiors in the compound. And our lead level designer Jeroen van Werkoven, who always knows more than me about the technical aspects of what we’re doing, came in and did all of the optimization on the map (he’s still at it as I type this).

How did the map change throughout its design?

Initially, the map’s sole theme was the construction site, with a small group of houses atop a hill where the defensive cache was to be located. As I started to really flesh out the construction area of the map, it became apparent that it wasn’t particularly conducive to our Firefight game mode. Having the Push layout all but locked in at that time, this presented an opportunity to design a dedicated area for Firefight, and the small set of buildings on top of the hill became a full-fledged Firefight layout.

At the other end of the map, I had put a small stream in pretty early on, thinking I might return to it as an intro for one of the coop layouts in the future (something like the beginning of Buhriz coop in Insurgency 2014). I was discussing this idea with another one of our level designers Jonny Hickenbottom, and his enthusiasm really set the shantytown theme into motion. He searched out references, enlisted the help of our lead environment artist Vuk Banovic to pump out an exhaustive set of assets for the theme, and produced a little character study for me to build upon.

Given all the possibilities this suggested, I felt well equipped to change the scope of this idea and eagerly started designing another Firefight layout that we could come back and overlay with some coop gameplay. The study that Jonny made for me became the C objective in this Firefight layout. 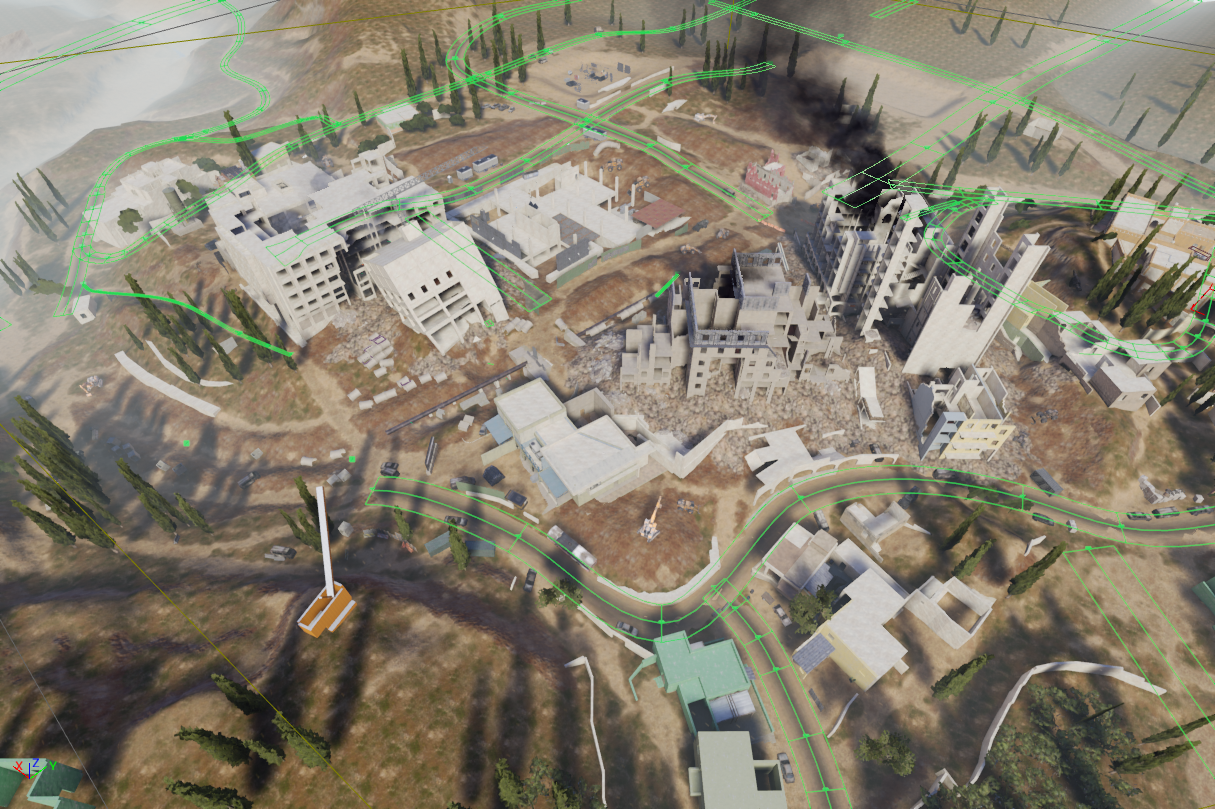 What’s your favorite area of Outskirts and why?

Forced to choose, I think the shantytown area is my favorite. As a team effort, it all materialized and came together so quickly and organically very near the end of development, yet in some ways, it feels the most fleshed out. 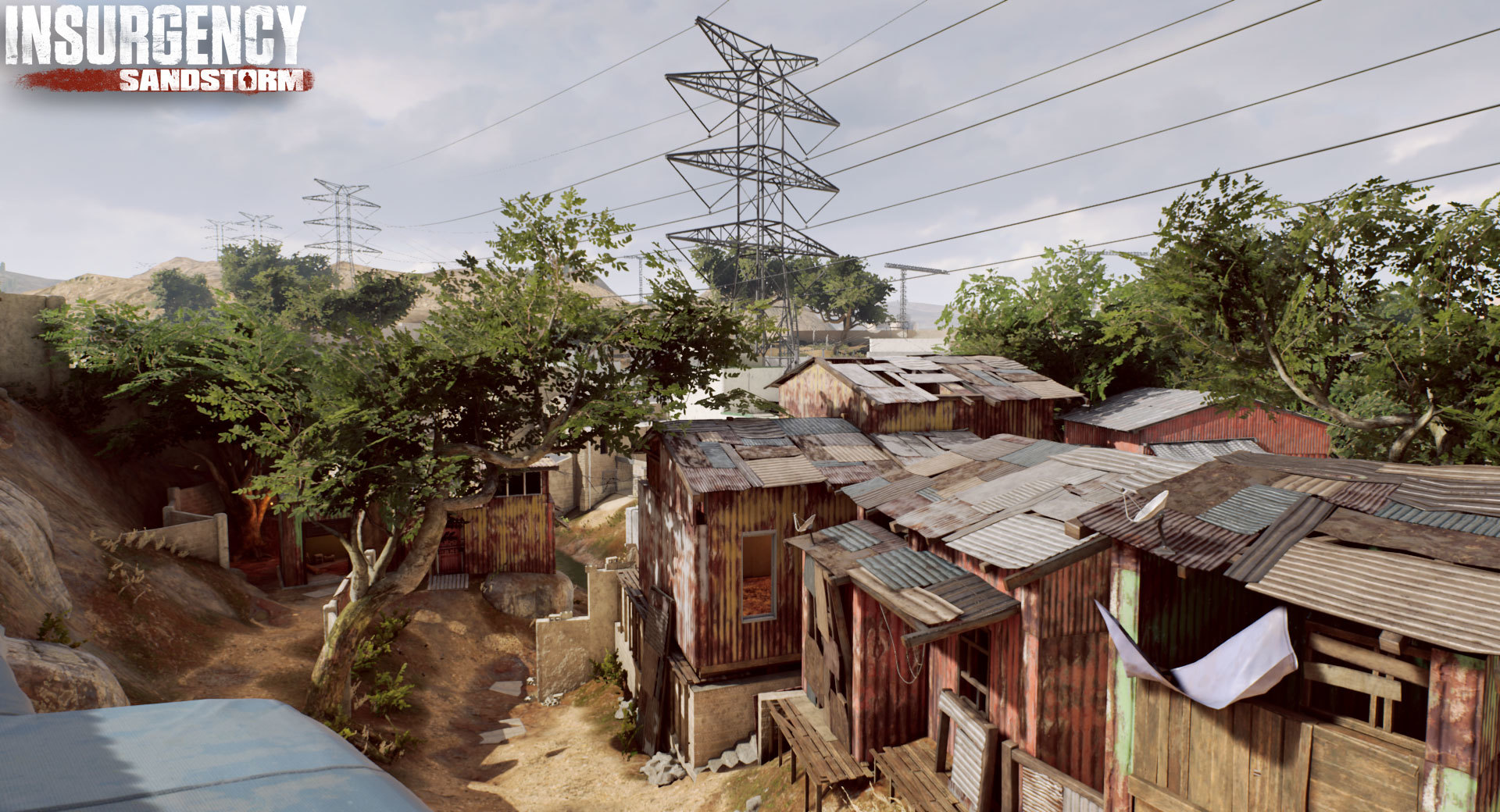 How does your background in architecture affect your level design?

A building is a solution to an incredibly complex problem. Designing one involves confronting an overwhelming set of variables that are both at odds with and completely interdependent on one another. As a result, approaching any of these variables in isolation is a prescription for failure, as the solution to one problem is bound to create ten more problems elsewhere.

As an architect, it’s imperative that you establish a top down understanding of the complicated relationships between all the variables, and strive to find a solution to every problem, if you can, through the lens of a single unifying idea. This is why architecture students don’t sleep.

I alluded to this sort of economical thinking above, when talking about the decision to go with the construction theme. The theme sponsors a design solution, in that the basic modular system gives us more freedom to move pieces around for gameplay. It sponsors a narrative solution in its reference to a cycle of building and destruction. And it also sponsors a budgetary solution, in that the extensive use of concrete across an entire third of the map significantly curbs our material usage, which is one of our chief concerns when optimizing maps, especially in an area where the player can see so much of the map at one time.

I studied Fine Arts as an undergraduate, and have always been obsessed with drawing, painting, and making things in general, but it was my architectural education that really brought discipline and structure to a lot of my artistic impulses. The obvious answer to the above question is that I come into level design knowing how a building is put together, but I think the more meaningful answer is that, in a more general sense, architecture has elevated my ability attack all sorts of creative problems. 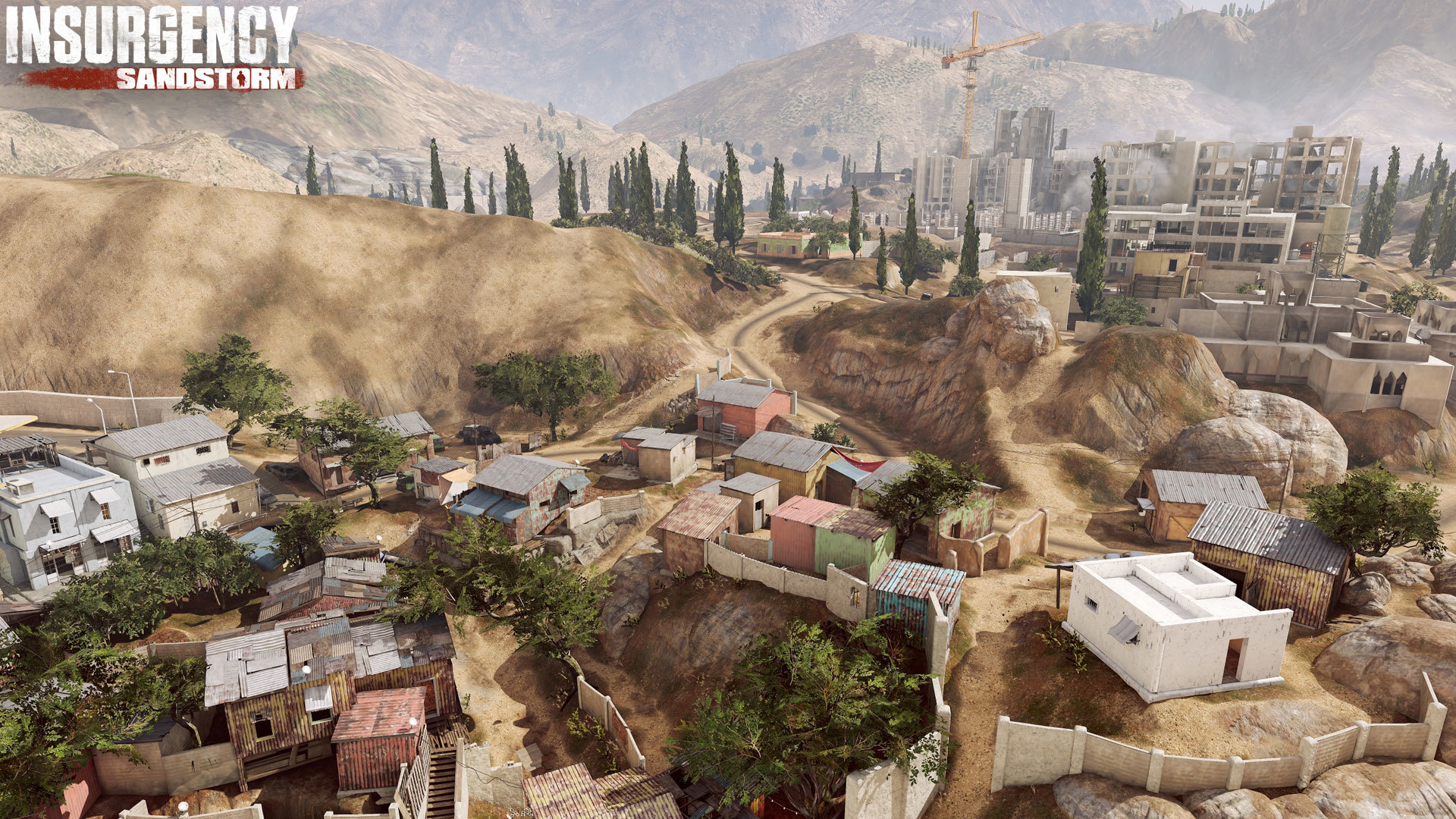 What are some other games that inspire your work?

I think that most of my direct inspiration comes simply from the prospect of exploiting the mechanics of the game I happen to be working on, so it’s tough for me to make a direct connection between what I love in games and how I think when I’m designing for them. That being said, there are aspects of certain games that have left a lasting impression, and in some way or another, become assimilated into the way I think about my own work.

For instance, I love the visual language of The Witness, the minimalist palette of Inside, the emergent gameplay of PUBG, the atmospheric serenity of Dear Esther, the slow tension of the original Insurgency mod, the tactics of Left 4 Dead versus mode, the no-nonsense approach of the new DOOM, the sheer panic of playing an Age of Empires game against another person, the cause and effect of Sim City...if I don’t stop here, I’ll soon be listing Atari 2600 games.

Thanks for taking the time to check out this community update everyone, and thank you Zach for your time and answers. Outskirts will be coming in our next update and features Checkpoint, Push, and Firefight game modes. Remember, be sure to fill out our new survey here[www.surveymonkey.com], and stay tuned for more community updates.
You must log in or register to reply here.
Share:
WhatsApp Email Link